Blog: Packing, Perils and Positives – how to survive your first (Drake Passage) cruise

Packing, Perils and Positives – how to survive your first (Drake Passage) cruise by Frankie Carr

Frankie Carr is currently taking part in the JR18002 research cruise in the Southern Ocean in conjunction with the ORCHESTRA project as part of the team investigating dissolved oxygen in the Drake passage. This is Frankie’s first research cruise, and here she tells us about her experience…

The turnaround from me knowing this cruise existed, and leaving home for the longest time I’ve ever been away, to go to the furthest place I’ve ever been from home in my life, was no longer than 6 weeks. In hindsight, this was probably for the best, as I didn’t really have time to get nervous about the trip – between my MPhil work and cramming in what is usually months of cruise preparation, I was kept relatively busy until the 28th October when I set off from Newcastle to embark upon my first research cruise! There is, understandably, a LOT of paperwork before one goes on a cruise – there are numerous medicals to pass, and jabs to get (destination-dependent, of course), and forms to fill in. Once this was all submitted, and I got the notification that my flights were booked, things started to feel far more real…!

As my departure date loomed, it was time to get packing. Despite my due diligence, and love of organisation (and lists), I have since managed to compile a whole host of things I wish I had packed (and things I wish I hadn’t!) whilst onboard. Primarily, I wish I had not taken the luggage allowance as a challenge rather than a limit. Lugging two large suitcases over 5,000 miles (and a similar number of stairs, it seemed) was impractical and caused my first cruise injury (I ran over my own foot…). Whilst people were glad I brought approximately 40 pairs of socks when we needed some to attach to the CTD, I overestimated how much I would care about matching socks at 23:30 when I woke up to begin my 12-hour night shift…! There are also certain things you just don’t realise you’ll need until you’re onboard, which will vary individually based on experience, but there are a few essentials: sun cream (I serve as a cautionary tale due to the intense burns I received in Stanley…!); an ethernet adapter for Macs; and an eye mask/ear plugs (ships are LOUD, and sleeping on them is challenging enough without doing it during daylight hours if you’re a night worker). I would also recommend taking seasickness tablets as a precaution, although in my experience I was very lucky not to feel nauseous at all and in fact the tablets made me feel worse!

At 15:24 on Sunday 28th October, I boarded the train from Newcastle to Oxford. This was to be the first leg of a long journey…! Upon arrival at Oxford station, I was ushered into a taxi with four strangers (who would later go on to be colleagues) to RAF Brize Norton. My first time on a military base was exciting enough to distract from the thousands of miles still to go, and it was here that we boarded the plane to the Falklands. The plane journey was not at all what I had expected, the plane itself was far more commercial in appearance and there were regular meals throughout out long journey (with a refuelling stop in the warm Cape Verde to drive home the coldness we were travelling to!). Upon arrival at Mount Pleasant in the Falklands, we took a coach to Stanley to a beautiful hotel which was to be our home for 2 nights. Surprisingly for me, homesickness had still not set in thus far, which may be because this hotel was nicer than my flat…

Whilst in Stanley, we had a couple of days to explore. This included a lot of ‘firsts’ for me and, again, seemed to create such an excitement surrounding the trip that I barely thought of home. We swam in the very cold (c. 6oC) seas at Surf Bay (aptly named due to its incredible waves), and hiked to Gypsy Cove where we got our first glimpse of penguins! Finally, on the evening of Halloween, it was time for us to board the ship. This was when the reality of what we were doing started to set in for me. The ship was markedly different from what had gone before, and was a bit of a shock to the system! The thought of sharing a cabin for three weeks certainly induced an element of trepidation, however this was soon dissipated by the introduction of my cabin mates, Maria and Morgan, who are both incredible (and now no doubt friends for life). 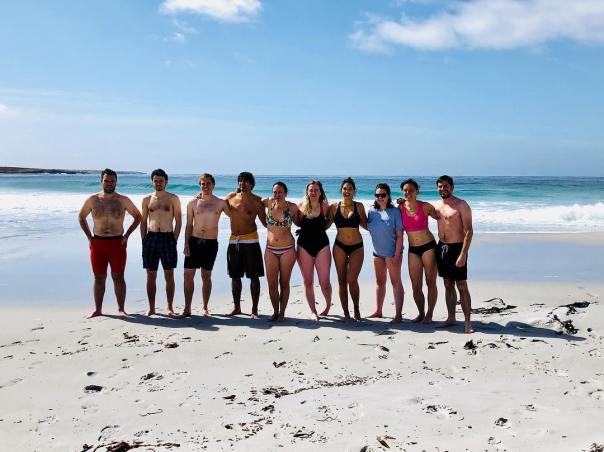 We were not due to set sail until Saturday 3rd November, therefore we had some time to get acclimatised to ship life. I’m not sure how the RRS James Clark Ross compares to other vessels, but to me this was positively labyrinthine! I would be convinced that I had learned where the bar, or the lab, or my cabin was, only to be stumped when a crew member showed me a different route! However ship life was incredibly fun – as we hadn’t begun science yet, once lab set up was complete we were able to get to know one another a lot better and there were MANY competitive card games…

As soon as we set sail, we attempted to get into our shift patterns. For night workers like myself, this was certainly a bit of a struggle which required a commitment to staying awake all night even without data to sample! The shifts were challenging as they meant a massive reduction in overlap and socialising – Morgan and I didn’t really see Maria for around two weeks – however, my lab group were incredibly supportive and positive to be around, which made eating ‘breakfast’ of leftover dinner items at 11pm slightly more palatable! 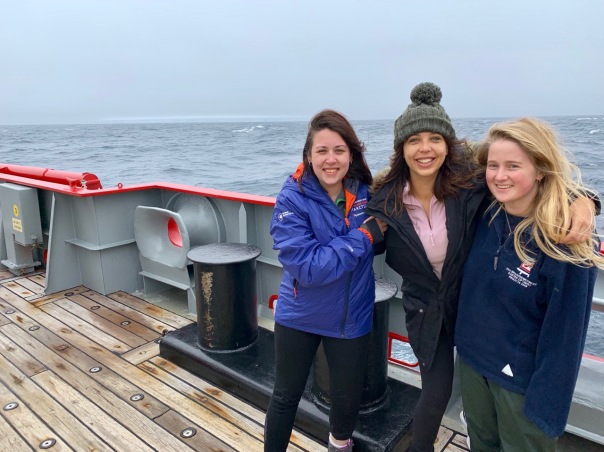 I was due to work in the oxygen team as a chemistry watchstander, relatively distantly removed from my usual work as a biologist. However, the other members of my team showed me the equipment and techniques and now I’d venture so far as to say I’m a dab hand in titrations! Working 12-hour shifts every day without fail was exhausting, but the work and company were so enjoyable that the hours flew by. I had my first experience of weather impacting scientific work when storms prevented us from deploying the CTD, yet the team worked hard to overcome this and successfully sample all stations. After a few days, I had also carved out a nice routine which revolved around a post-shift crossword with the rest of the night team!

As I write this, we have approximately two days of science remaining before we return to port in Stanley, and spend a few days there before the long journey home. My first cruise has certainly been tiring, but it has also been one of the most incredible experience of my life. I have seen penguins, an iceberg, Elephant Island, and humpback whales mere feet from the ship. I have learned new methods and practices, and met some amazing scientists. I have no doubt been lucky in many elements (my lack of seasickness, for one), however my overwhelming response is that I cannot wait to go on another scientific cruise!

Frankie is in the second and final year of her MPhil at Newcastle University, studying the community structure of amphipods in the Mariana Trench. She is currently researching and applying for PhDs to build on this, in particular looking at the processes that impact extreme environments such as the deep sea. Find Frankie on twitter @francesca_carr.

← Blog: ORCHESTRA cruise JR18002 across the Drake Passage
Blog: Crossing the Drake passage in a container →

This site uses Akismet to reduce spam. Learn how your comment data is processed.